The Stage, A Book & The Silver Screen

A collection of 3 Duke Special releases, presented in a lovely slipcase and containing

CD1 - Duke Special Presents The Songs From Mother Courage and Her Children
An album of the music written and performed by Duke Special for Deborah Warner’s production of the Bertolt Brecht classic play, translated by Tony Kushner and staged at the National Theatre in London over two months in 2009 and starring Fiona Shaw.

CD2 - Huckleberry Finn EP.
Duke Special’s own take on the unfinished musical by Kurt Weill that draws inspiration, and creation from the novel “Huckleberry Finn” by Mark Twain. Duke is the first person ever to record this suite of songs.

CD3 - The Silent World of Hector Mann
This recording is a collection of songs inspired by Paul Auster’s Novel ‘The Book of Illusions’. The book largely centres on the main characters’ enlightenment into the world of Hector Mann and the silent movies he created. The CD contains 12 songs written by Duke Special and 11 of his friends, including Neil Hannon, Ed Harcourt, Matt Hales & Ben Castle and was recorded by legendary producer Steve Albini at Electrical Audio in Chicago, USA. 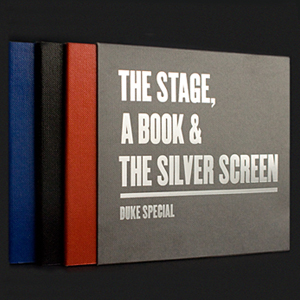